A “Transition to Organics” conference held last Friday at Meditation Mount in Ojai brought conventional and organic farmers and gardeners together to discuss the future of farming and pest control in the Ojai Valley.

“I feel this has the potential to be an historic meeting,” Sprinkel said. “This was a very positive event and was really well attended. About 60 people were there. There was a lot of hope and optimism.”

Supervisor Bennett noted that Ojai is leading the way in his district with programs and activities, moving Ojai toward a goal of becoming a model green city. This conference was another step in that direction, he said.

Event organizer Patty Pagaling, who has worked as Pesticide Free Ojai Valley’s executive director, said she anticipates this will be a quarterly event. “I think it’s very important with this new group, to promote the positive impacts that organic farming can have for our community,” Pagaling said.

Sprinkel, the owner of Gozo Farm, president of the board of the Ojai Center for Regenerative Agriculture, and co-owner of The Farmer and The Cook, an organic grocery store, café, and bakery, praised presenter Matt Boeck’s concepts for making a slow transition to organics.

“This isn’t about making the transition overnight,” Sprinkel said. “It’s about testing it on a block of land and seeing the benefits and learning about organic farming. I really liked how Boeck made that point clear.”

Boeck, an organic horticulturist for Jay’s Landscapes, Inc. in Carpinteria and Upper Ojai resident, explained how insects and their predators interact with the immune systems of plants. He reinforced the idea that the predators to the insects that attack plants are an essential step in the food chain and the control of insect pests.

“It’s important to simply ask the conventional farmers to consider making the switch to organic practices,” Boeck said. “I tried to explain to them that they can use less fertilizer than they’re using now. They need to understand that it is possible to switch slowly to organic practices and have it be financially better for them.”

Peter Ohsol from the organics division at Sunkist gave the history on how the Sunkist Growers Organics Division came about, where its markets are, and how to get involved as an organic grower.

During the day there were discussions about having a farmer’s cooperative packing house in the Ojai Valley, and there were many questions about the different less toxic techniques presented at the meeting, like flaming for weed control, the effectiveness of using alternative safer sprays, current pest issues, and the use of beneficial insects.

The spirit of the conference was to showcase organic growing and nontoxic pest management techniques. There were a lot of questions and dialogue about the effectiveness and costs of organic farming.

“As we make the transition to organic farming practices more and more, then we can rebrand Ojai as an organic oasis,” Sprinkel said. 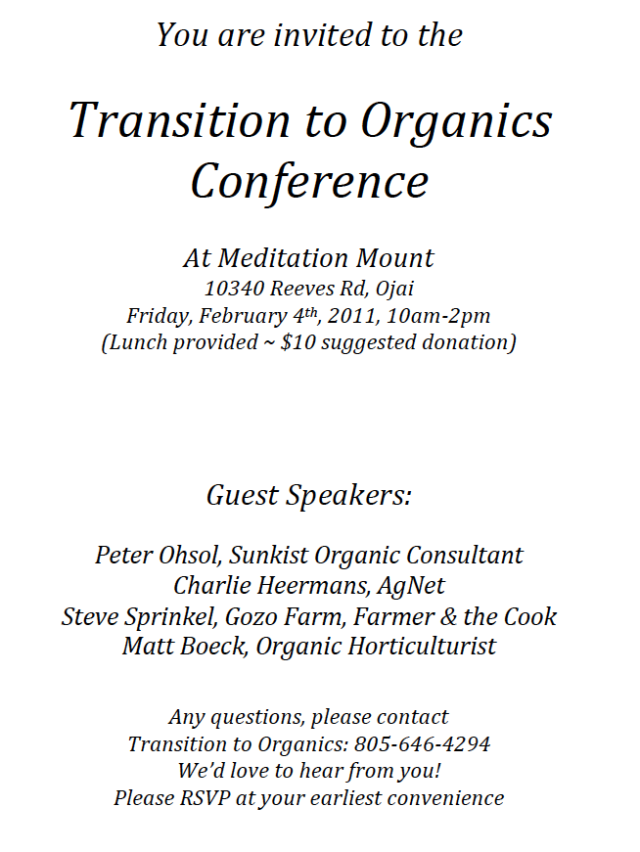